How Health Care Organizations Use the Death Master File 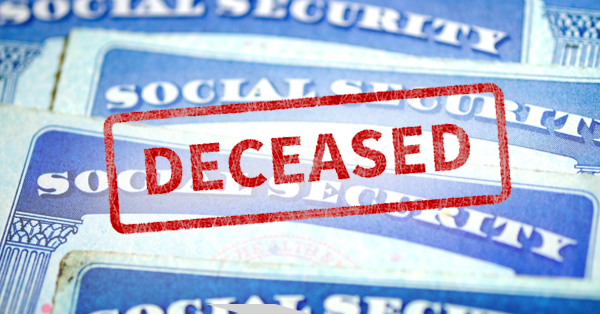 According to the Department of Health and Human Services (HHS), in 2019, the Office of the Inspector General brought “809 criminal actions against individuals or organizations engaging in crimes against HHS programs and the beneficiaries they serve,” as well as 695 civil actions. Altogether, this amounts to nearly $5.9 billion in misspent funds from Medicare, Medicaid, and other HHS programs.

One common fraud tactic? Using the Social Security number (SSN) of a deceased person to collect benefits or commit some other kind of identity fraud.

One of the tools the government has to identify and stop fraud early is by checking against their Death Master File (DMF) and releasing that information publicly to ensure a variety of different institutions, both public and private, can use it to verify identities.

What is the Death Master File?

The Death Master File (DMF) is also known as the Social Security Death Index (SSDI) and is a subset of the Social Security Administration’s (SSA) Numident, the Numerical Identification System, which is a database file containing data on all Social Security numbers (SSN) since 1936 and digitized in 1961. It is updated weekly and each entry contains, when available:

The DMF contains over 83 million records of deaths that have been reported to the SSA of individuals who had Social Security numbers. In its current form, the DMF has been available and searchable since 1980 for records dating back to 1962. The records on the DMF are considered public under the Freedom of Information Act.

The SSA does not collect death records for individuals on the DMF and cannot guarantee the authenticity of every record. This means, if an individual is not listed in the DM, it doesn’t necessarily mean they are alive.

In 2011, a significant change was made to the way the federal government processes information on reported deaths in the DMF. Previously, the SSA used information about deaths from state records to compile a comprehensive list of deaths. However, in November 2011, the SSA announced a statutory requirement to keep certain records confidential to state departments. Now, the SSA can only use that information to corroborate and correct its existing death records rather than as the primary source of data.

This resulted in the loss of 4.2 million death records from the DMF. While the DMF is still the most accurate way to screen for deaths, it isn’t foolproof.

How organizations use the Death Master File

The DMF is one of several available databases for federal agencies, genealogists, medical researchers, and other organizations to use to verify deaths, prevent fraud, or conduct other important research.

For instance, a bank or lending institution might check against the DMF to ensure that the SSN provided wasn’t connected to a deceased person. And, one of the most obvious reasons is to stop benefit checks from SSA, the Veterans Administration, the Office Personnel Management, among others.

In health care, the DMF is primarily used for initial credentialing and ongoing screening of practitioners to detect identity fraud. This prevents practitioners from masquerading as someone else and from using the credentials of another provider to illegally prescribe drugs or other goods and services. This type of fraud racks up billions of dollars every year in fraudulent claims that fall to taxpayers, patients, and health care organizations.

While the DMF is not perfect, it is an essential source of information for the credentialing process. These records are one piece of a puzzle that makes up the total picture of a practitioner’s record, qualifications, and experience.

Verisys uses the DMF with thousands of other primary source publishers and records to build a comprehensive and accurate picture of an individual or entity, proactively preventing fraud, abuse, and reputational damage. We take the raw data from over 320 million records to match each piece of data to the right provider or entity with 99% accuracy in a usable, actionable format.

A depth of understanding about what each of these primary source records is and what they offer is an essential part of Verisys’ end-to-end credentialing and verification services. A complete and authoritative view of providers and their qualifications makes Verisys an essential part of the compliance and continued monitoring process.