How Verisys Spots an IT Unicorn 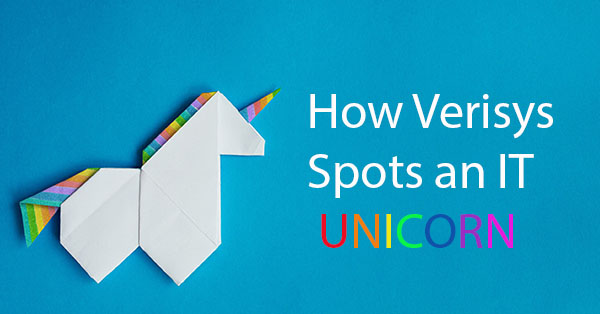 Verisys’ Chief Technology Officer, Chad Fritz, shares his insights on how to spot an IT Unicorn within your organization and how to foster their growth.

Have you ever worked with a Developer and thought: they won’t be a Developer for long? Sounds harsh, right?

You may think I’m talking about finding and hiring a developer who won’t make it as a developer and will need to be replaced: someone who never really bonds with the mission or vision of the company, let alone the team. While that is a hot topic worth discussing, it’s not what I’m referring to here.

I’m talking about that unique and somewhat hard-to-spot developer (let’s use the popular term Unicorn) who is destined to play a bigger role within a growing IT department. I have absolutely no issues if someone just wants to be a developer. I’ll even encourage those who want to consider a developer position, to do so. Across the U.S., and especially here in Utah, we simply do not have enough developers to go around. It’s baffling to me, as a CTO, why more young people are not considering coding or developing as a career. It’s a great way to be creative, solve problems and make great money while wearing tee shirts and jeans to work every day. Plus, the demand for skilled developers is only going to increase over time no matter how many robots take over human jobs. Who do you think keeps the robots going?

What I’d like to talk about are those individuals who have skills they don’t know they have and how to spot them.  As a CTO or team leader, I’m sure you have noticed a few individuals who started out as a developer and quickly became the team’s “go to” person. The person everyone selects for the lead on new projects. The one with fresh ideas at every stand-up meeting. Why them? What do they have that sets them apart from the rest?

I believe these high performers (Unicorns) possess 3 common traits. You would be wise to look for and even foster these traits while managing your team. Developers are not always aware of these traits in themselves so it’s up to you, as their leader, to identify and grow these skill sets or risk your competitor picking off your best talent and assisting them with their career goals.

Look for Developers with the following skill sets and set up a career plan ASAP.

Drive – this is the first thing that stands out to leaders.  When a developer comes in with drive and seems to raise the bar for others around them, that gets noticed. They ask good questions that don’t usually come from typical developers because the big picture or overall mission, not just their job, is at the top of their mind.  They work harder and smarter than their peers but understand it takes a village to successfully complete a project.

Leadership – you can think of leadership in many ways and it’s relatively simple to spot.  This shows up in meetings when a difficult question is asked of the group and the Unicorn has several options to offer. You quickly discover who everyone is going to turn to: that person naturally becomes a leader on the team, with or without the title. This also shows up outside of work. For example, when you are out with a group of coworkers, look who the group turns to when they want to decide what to do next. These individuals have the ability to start conversations and bring others into the discussion. The Unicorn is always the one that makes the statement “Cmon, let’s get this done.”  These developers are the ones you need to foster.

Translation skills – let’s face it, this world has business people and it has technology people.  Those two groups need to talk to each other and it’s a skill that is difficult to learn, especially for the tech-minded folks. Small talk doesn’t come easy to most developers, but Unicorns know how to work a room. When you find someone who has a natural ability to present or speak to people at all levels in an organization, it’s a serious advantage, aka a Unicorn.

I’ll admit there are many other traits that could be added to this list that people who stand out possess, but I believe when you see the skills listed above, you have found someone special who won’t be a developer for long. It’s up to you to spot the potential in each of your team members and decide if they stay and grow with you, or if someone else lures the Unicorn away to greener pastures.

At Verisys Corporation we look for these stand out qualities in our employees, and as leaders we actively support the career paths of those within our organization. Helping to identify the strengths of each individual on the team, then capitalizing and fostering those good qualities builds even stronger teams. Promoting from within is the goal whenever possible at Verisys. When a Unicorn wanders into our pasture, we do our best to create an atmosphere where they can stretch, grow and strive to meet their personal career goals. IT Unicorns often lead strong teams in accomplishing the company’s goals and mission. If you think you have an IT Unicorn in your midst, take my advice and don’t underestimate their value.